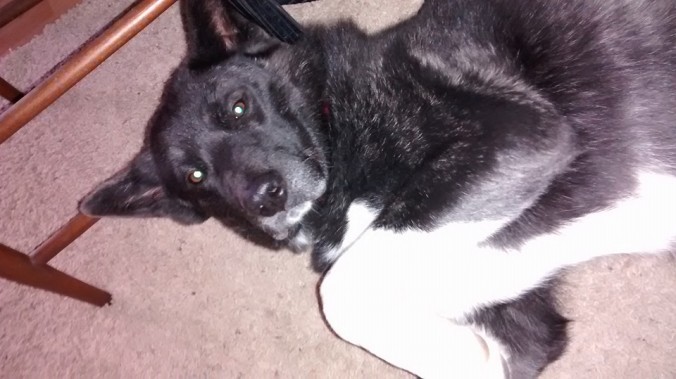 Everybody wants to pet my dog. I don’t blame them, she’s friendly, fuzzy and totally adorable! Under normal circumstances, I’m happy to introduce her and let people pet her to their heart’s content. There are some times, though, (most times, actually) when running up and thrusting your face into a strange dog’s face (no matter how cute and fluffy) is not advisable.

I do everything in my power to keep my dog safe and I have to say that keeping her safe from careless, unthinking humans is the hardest part. My dog can never make a mistake or a judgment call. If she ever bit anyone, no matter what the circumstances, the chances are good she would have to be put down by a court order.

The following is a recent example:

Last weekend, we stopped off at a gas station on the way home. My husband went inside while Suki and I stayed in the air-conditioned car with the windows open somewhat to let her sniff the outside. Of course, her pretty face attracted attention as it always does. Some small children came up to my car to ask if they could pet my dog. To their credit, they waited until I got her into “greeting” mode and said yes. They were respectful and gentle and my girl was very sweet, submitting to the flurry of tiny, sticky hands with good grace.

The next person to come up was a full-grown man. He also asked if he could say hello to her. He did not have the courtesy to wait until I said yes, but thrust his hand into her face through the open car window. Suki’s a good girl, however, and tolerated the intrusion.

He asked where I got her and told him she was a rescue from a breed association. This man spent the next five minutes telling me how much he knew about “Northern” breeds and how he rehabbed rescue dogs. He then grabbed Suki by her cheeks and shoved his face into hers without warning. My heart stopped for a second, because neither me nor my dog were expecting this, but again, she took it in stride. His next move was one of serious stupidity, though.

He said “you look hot, doggie, are you hot?” Remember, we were sitting in an air-conditioned car with the windows 1/4 open in the back–she was not uncomfortable! I told him as much. He looked at me and said smugly, “most people don’t know how to check if a dog is hot” at which point he thrust his hand well into our car and down between Suki’s front legs. This was a mistake. It was “her” car and she has some sensitivity to having her legs and paws handled by strangers. She snarled and snapped at him (completely as a warning). I was in the front seat and in no position to stop him or her. After he pulled his hands out of harms way, he expounded on how his dogs never go out when the humidity was above such-and-such (I can vouch for the fact that it was likely far hotter and more humid in our house than it was in the air-conditioned car!)

This man was only concerned with his own self-aggrandizement and didn’t spare one moment of thought as to what might happen to my dog as a result of his recklessness. If she had bitten him, her life would likely be over, even though (I feel) he was completely at fault.

For my fellow dog parents with guardian breeds, you know why you chose to have them. Guardian types are fiercely loyal to “their” people and the hope is there that your sweet, loving puppy might at least look scary if someone thinks it’s a good idea to break into your house.

Part of owning these challenging and noble breeds is to do our level best to socialize them so their chance of making a rash decision is mitigated. Yet we can do everything right and still have some bonehead force a reaction out of them. Guardian breeds are more inclined toward protecting their family/pack than, say, Labs or Retrievers and it would be a good thing if people considered that.

What I’m asking is simple: Don’t take the chance of a dog losing their life because you can’t resist a furry face! Don’t say you don’t care if you get bitten. Trust me, if a person gets bitten in the face they will attempt to sue, almost 100% of the time. If a dog bites someone in the face–even accidentally grazes a cheek pressed into its face without warning–that dog’s days are numbered. ASK the owner of the dog in question if you can say “hello”  and WAIT for an answer before taking the initiative! Respect the owner’s wishes if they say no. Please be respectful around someone else’s dog and, if they’re an owner worth their salt, they should keep their pooch under control as well.

My dog’s life means more to me than your feelings or your desire to talk baby-talk and “schmooze” with her. If you can’t respect that, then get yourself something soft to carry around (“Of Mice and Men” style) to pet when the urge becomes too strong!

Of course, I probably would let you pet my dog if you ask me because she is social and well-behaved. Please keep in mind, though, that dogs are living creatures subject to their own feelings and reactions. I’m sure we all do our best to curb these natural inclinations of protectiveness and self-preservation in our canine pals, but in spite of our best efforts, well… stuff happens. Dogs can have bad days too. Please keep yourself and my dog safe by not putting her and me in an awkward position. Please give us a fighting chance to make it a good experience for all concerned!